Although usually regarded as a vegetable, aubergine (or eggplant or brinjal as it is also called) is technically a fruit. The type of aubergine most familiar in British supermarkets is plump, glossy and dark purple in colour. In recent years it has become strongly associated with Mediterranean cookery, a main ingredient in such fashionable dishes as moussaka, ratatouille, and baba ganoush. It comes, though, in a wide variety of shapes, sizes and colours, and has long been grown throughout the world, having come originally, it is believed, from Asia, probably India.

As far as cooking is concerned aubergine is exceptionally adaptable.  It can be baked, grilled, fried, boiled, stuffed or stewed, and while low in calories is high in vitamins B and C. Its fleshy texture is absorbent, allowing it to match with all 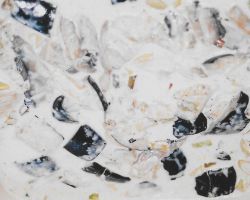 kinds of different flavours. This, I think, is the quality that most attracts me to aubergine. Not only is it a key element in many celebrated dishes like those mentioned above, it can also be used in a large variety of ways as a dish in its own right, making it a centrepiece rather than an ingredient as it were. It is definitely a vegetable (or fruit) to be adventurous with.

Aubergine cooked in a cream sauce is a good example, a simple yet delicious aromatic  dish which can serve for a formal or an informal supper. The quantities I have given will make a generous meal for two people. To provide for more, simply increase the quantities to whatever you need.

Lay the aubergine on a chopping board. Wipe the aubergine and, using a large sharp knife top, top and tail it. Cut it in half lengthways and then cut both sections in half lengthways again. Then slice all four sections crossways into the size of chunks desired. At this point, older cookery books always recommend that the aubergine should be sprinkled with salt and set aside for thirty minutes so that any bitter juices can drain out of it, but nowadays modern cultivation has rendered this practice unnecessary. In a deep frying pan, gently fry the aubergine chunks and the mushrooms in some olive oil, together with a knob of butter (optional), or use, as I often do, vegetable  lard.  Be prepared to add quite a bit more oil or fat because of the extremely absorbent nature of both aubergines and mushrooms.

When the aubergines and mushrooms are beginning to soften with as little browning as possible, cover lightly with stock. Bring to boiling point, reduce heat. Add salt and pepper, stir in a dash of  tomato purée (optional)  and simmer uncovered, carefully and slowly, stirring regularly, for fifteen or twenty minutes until the aubergine is soft and there is very little liquid remaining. What liquid there is left will be rich. Pour onto this liquid as much of the cream as is needed (probably all of it). Stir in the nutmeg or cinnamon, and heat through.

Serve very simply with rice, or with new potatoes and green vegetables, or pasta, or a side dish of roast potatoes or roast parsnips, or vegetarian sausages or burgers, or pretty well anything you fancy.