Not all that long ago, asparagus had the reputation in Britain of being a seasonal speciality, a culinary herald of spring, arriving with May and barely surviving the month. Its arrival was treated with some solemnity. The usual method of cooking was for it to be carefully trimmed, tied in bundles and cooked upright in special steamers so that the tender tips and the tougher stems would be cooked for the same amount of time. As the season was so short, and asparagus so delicious, the advice of connoisseurs was always to take full advantage of it while you could. It was an experience not to be missed. 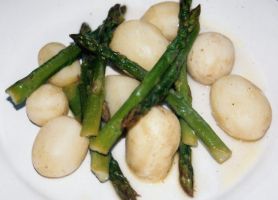 Although asparagus is now available in supermarkets all the year round and at a reasonable price, many of these older attitudes survive, mainly because the season for ‘home-grown’ British asparagus is still largely restricted to the month of May. But, asparagus from other parts of the world is readily on hand, and if less stunningly fresh it remains delicious. Furthermore, modern intensive methods of production and marketing have rendered its cooking considerably easier.

Asparagus spears come in various sizes and colours and are graded by the thickness of the stalks. Of the three main grades, the one generally favoured in Britain is the medium green-stem. If there are hard scales on the stem, then trim them off but nowadays even this is usually unnecessary. The only preparation needed is to remove the hard bottom part of the stem. Do this by gently bending the spear, running your fingers down the stem from the top until it snaps naturally at the point where it is beginning to harden.

Don’t discard the hard pieces. They will make a stock for the asparagus. Put the pieces into a small saucepan. Cover them with cold water, add a scant spoonful of vegetable stock or a vegetable stock cube, some fresh chopped  parsley, though no other herbs, whether fresh or dried, or any thickening which might adversely affect the asparagus flavour. Bring to the boil and simmer gently for about ten or fifteen minutes, adding a little more stock if necessary. Strain and discard the debris. Reserve the liquid and use the same saucepan to make the sauce.

Place in the saucepan, a knob of butter, some olive oil (about two tablespoons), the juice of a fresh lemon, salt and pepper to taste, and a generous pinch of golden caster sugar (optional and also according to taste). Pour on the reserved stock, stir well, reheat and simmer for a couple of minutes.

To cook the asparagus. Place in the bottom of a deep frying pan or large saucepan. Don’t pack the spears closely together, but layer them crossways. Then pour the stock over them. Bring to boiling point, turn the heat low, and simmer gently and uncovered for about ten minutes. The asparagus is cooked when a sharp pointed knife easily pierces the thickets part of the stalks. Transfer to a serving dish.

For a modern version of the traditional springtime dish, boil new potatoes with some garden mint, and dress them with the asparagus, using fresh bread or rolls to mop up the sauce. Nothing else is really needed. If you do want something a little more substantial, then vegetarian sausages or burgers would be a suitable addition.

And why not? Outside of the traditional May ritual, asparagus is now used in an increasingly wide variety of ways and, being available for so much of the year, it is rapidly becoming a general purpose vegetable. It goes well with eggs and cheese; with mashed potatoes as well as new; in risottos, flans and quiches; and baked in the oven. Or simply cooked with other vegetables, as here, shown simmering in a frying pan with courgettes, mushrooms and chunky carrots. The asparagus was added when the other vegetables were already cooking, and the asparagus stock as described above was also used, though I decided not to include the lemon.